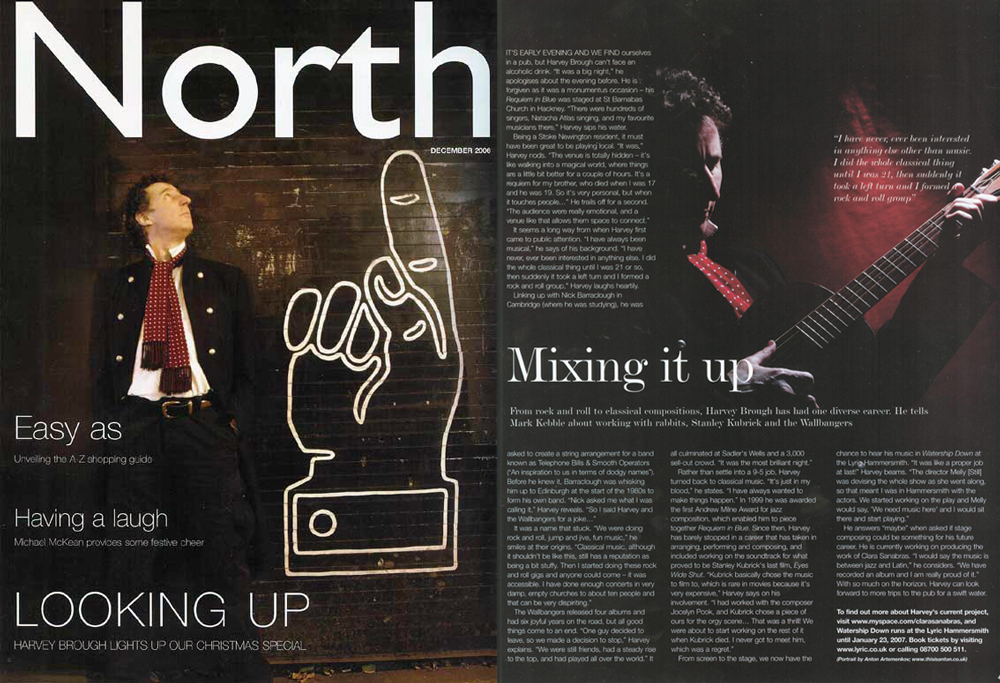 Mixing It Up – North Magazine

Ii’s early evening and we find ourselves in a pub, but Harvey Brough can’t face an alcoholic drink. “It was a big night” he apologises about the evening before. He is forgiven as it was a monumental occasion – his Requiem in Blue was staged at St Barnabas Church in Hackney. “There were hundreds of singers, Natacha Atlas singing and my favourite musicians there,” Harvey sips his water.

Being a Stoke Newington resident, it must be great to be playing local.. “It was,” Harvey nods. “The venue is totally hidden – it’s like walking into a magical world, where things are a bit better for a couple of hours. It’s a requiem written for my brother, Lester, who died when I was 17 and he was 19. So it’s very personal, but when it touches people . . .” He trails off for a second. “The audience were really emotional and a venue like that allows them space to connect.”

It seems a long way from when Harvey first came to public attention. “I have always been musical,” he says of his background. “I have never, ever been interested in anything else. I did the whole classical thing until I was 21 or so, then suddenly I took a left-turn and formed a rock and roll group.” Harvey laughs heartily.

Linking up with Nick Barraclough in Cambridge (where he was studying), he was asked to create a string arrangement for a band known as Telephone aBill and the Smooth Operators (“an inspiration to us in terms of dodgy names”). Before he know it, Barraclough was whisking him up to Edinburgh at the start of the 1980’s to form his own band. “Nick asked me what I was calling it,” Harvey reveals. “So I said Harvey and the Wallbangers, for a joke…”

It was a name that stuck. “we were doing rock and roll, jump and jive, fun music,” he smiles at their origins. “Classical music, although it shouldn’t be like this, still has a reputation as being a bit stuffy. Then I started doing these rock and roll gigs and anyone could come – it was accessible. I have done enough concerts in very damp, empty churches to about ten people and that can be very dispiriting.”

The Wallbangers released four albums and had six joyful years on the road, but all good things come to an end. “One guy decided to leave, so we made the decision to stop,” Harvey explains. “We were still friends, had a steady rise to the top and had played all over the world” It all culminated at Sadler’s Wells and a sell-out 3000 crowd. “It was the most brilliant night.”

Rather than settle into a 9-5 job, Harvey turned back to classical music. It’s just in my blood,” he states. “I have always wanted to make things happen.” In 1999 he was a awarded the first Andrew Milne Award for jazz composition, which enable him to piece together Requiem in Blue. Since then, Harvey has barely stopped in a career that has taken in arranging, performing and composing and included working on the soundtrack for what proved to be Stanley Kubrick’s last film Eyes Wide Shut. “Kubrick basically chose the music to film to, which is rare in movies, because it’s so expensive,” Harvey says on his involvement. “I had worked with the composer Jocelyn Pook and Kubrick chose a piece of ours for the orgy scene.  That was a thrill! We were about to start working on the rest of it when Kubrick died, I never got to meet him, which was a regret.”

From screen to the stage, we now have the chance to hear his music in Watership Down at the Lyric Hammersmith. “It was like a proper job at last!” Harvey beams. “The director Melly [Still] was devising the whole show as she went along, so that meant that I was in Hammersmith with the actors. We started working on the play and Melly would say “we need music there” and I would sit there and start playing”.

He answers “maybe” when I asked if stage composing could be something for his future career. he is currently working on producing the work of Clara Sanabras. “I would say the music is between jazz and latin,” he considers. “We have recorded and album and I am really proud of it.”

With so much on the horizon, Harvey can look forward to more trips to the pub for a swift water.